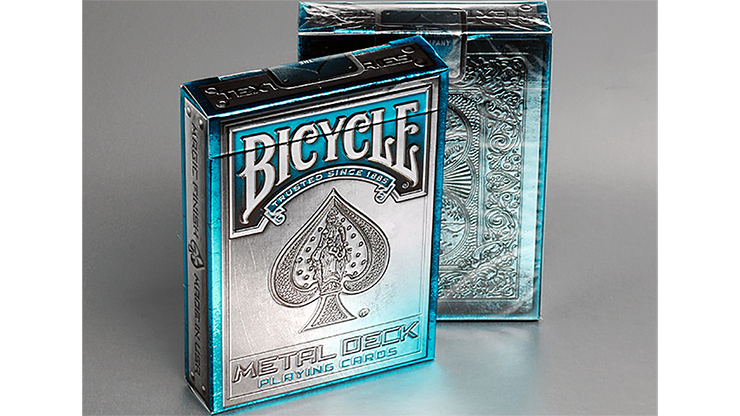 If you've never seen the METAL DECK, you're in for a treat - these cards really look as if they're made of metal!

The METAL DECK is a reinterpretation of the classic Bicycle RIDER BACK deck using a set of textures to give the cards a real metal aspect.

The BLUE EDITION of the METAL RIDER BACK DECK has the same cards as the original, although the color accents in the back, Ace of Spades and tuck case are blue.

This new blue color fits much better with the court cards' color scheme.

The numbered cards have that awesome metal customization of the original deck. You'll see the shine of the metallic glow, as well as a screw in two of the corners - this looks so realistic!

For those lucky customers who already own the original deck, this version will give them some extra features, especially those who want to use the deck for magic routines or card games:

We have also worked with USPCC to tweak the color scheme to a more intense blue.

The tuck case is as impressive as the original, with a fantastic, silver foil stock and deep debossed details.