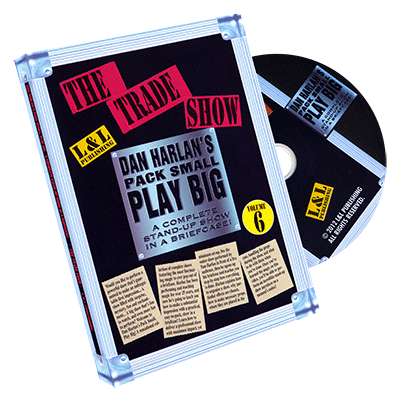 The Trade Show presentation on this volume demonstrates how a performer can generate mystery, excitement and, most of all, a crowd in the very competitive trade show environment. Though all of the effects center on the central theme of working a trade show, there's a wide variety of plots and methods in play that will captivate any group of spectators.The show begins with "Repeat Business," a version of the classic Six-Card Repeat that's guaranteed to generate interest as chances for the spectators to win a valuable prize seemingly multiply at Harlan's fingertips. Then, to underscore the benefits of the product or service being represented at the show, Dan uses another classic bit of conjuring, the Professor's Nightmare, in an effect he calls "Price, Quality, Service." He finishes the first portion of the show with "Loose Ends," Harlan's version of the Torn and Restored Napkin, complete with the classic sucker ending that's sure to garner laughs and enhance the attention of the spectators.

To begin the next set of effects, Harlan uses two spectators and two torn dollar bills in "Value," a great re-working of Grant's Million Dollar Mystery, a piece he uses to underscore the company's money-back guarantee. Two one-dollar bills are openly torn in half and one half is given to the appropriate spectator while the other two halves are burned. The destroyed halves are not only restored but found to be in an impossible location that was under the spectator's control at all times. This highly entertaining piece segues perfectly into "Trust Me," which features Dan smashing and then subsequently restoring a spectator's borrowed wristwatch. To close out the set, Harlan performs "No Worries," his take on Slydini's classic Paper Balls Over the Head, a trick that plays huge and is perfect for building trade show audiences.

In the final set, Dan begins with a puzzling version of the Salesman Hotel Mystery using just a few playing cards yet leaving the onlookers with a mystery they'll be discussing for the rest of the day. He then brings out a classic - the Chinese Linking Rings - to illustrate how the company makes connections with its customers in a piece he calls "Compatibility." Again, this is the perfect trick, because of its high visibility, to build a large crowd in front of a trade show booth. To end the show, Dan then demonstrates a giveaway item - the Three Card Monte - and encourages the audience members to take one with them so they can perform the trick for their friends and family (which is a brilliant stratagem for getting the company's contact information into the hands of many, many potential customers!) 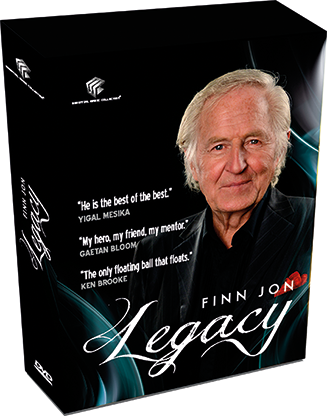