There are people who can do good magic. There are people who can make you laugh. But there are very few performers who can make you laugh out loud while doing good magic. Chuck Fayne is one such performer. Contained on this exclusive 78-minute video tape are the routines that Chuck has used to earn a worldwide reputation. Each routine is highly magical and presented in Chuck's own hilarious style. Highlighting this video is Chuck's sidesplitting, extremely magical, Card on the Seat. You've got to see it to believe it-strong magic and great comedy entertainment that you'll want to immediately add to your own repertoire. Chuck Fayne LIVE! Contains:

In addition to watching and learning all of this hilarious and strong magic, Chuck shares with you his many years of experience regarding working with audiences and how to make them laugh, as well as the psychological nuances of routining a magical effect. 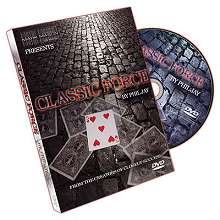