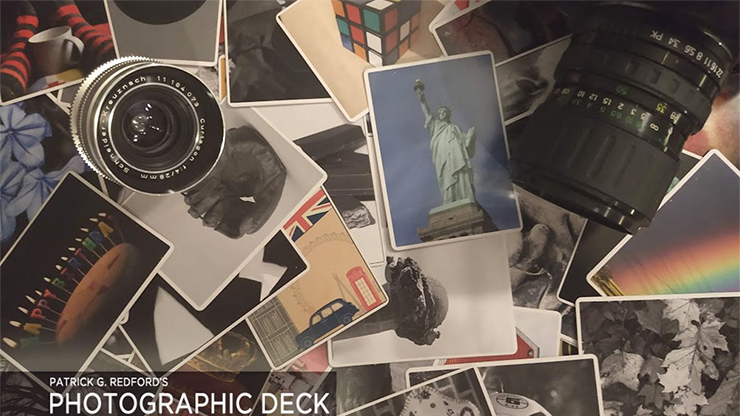 It started with thirteen photographs fifteen years ago, then it doubled to twenty-six. Now the system contains a full deck of 54 photographs. Each photograph represents a different playing card in a standard deck of cards.

The Photographic Deck is the same size as a standard poker size deck of playing cards making it easy to manipulate.

The Photographic deck will enhance your favorite card tricks.

Learn the unique properties of the deck and perform unique effects not before possible.

Marvel at its design.

The Photographic Deck is different

Yes, there have been other decks on the market that look similar, but none of them are quite as versatile as the Photographic Deck.

Every photograph secretly represents a playing card from a standard deck of 54 playing cards (52 cards + two Jokers). The system is organic. The connection link from photograph to playing cards is undetectable unless you know the Photographic system. There are 26 black and white cards (representing the 26 black cards in the deck) and 26 full color cards (representing the red cards in the deck). Thirteen clubs are also represented in a logical linked system as well as and the thirteen photographs that represent each spade. Conversely, this is also true of the full color cards representing the hearts and diamonds.Below are eight photographs in the deck. The top four represent the four Kings (from left to right: King of Clubs, King of Diamonds, King of Spades, King of Hearts) and the bottom four represent the four Aces (from left to right: Ace of Clubs, Ace of Spades, Ace of Diamonds, Ace of Hearts).

The system is easy to learn. You'll quickly learn how to translate each image into its playing card equivalent minutes after opening your deck.

Each card is marked with a unique marking system that is exclusive to the Photographic deck. The marking system is easy to read and one only needs to see any one of the four sides of the back design to determine its suit and value. That means the cards may be identified while in a spread, dribbled from hand to hand, or while riffled towards the audience by one corner.

Stack the Photographic deck into any stack system you already know!

As all fifty-two cards and two Jokers are represented in the Photographic deck, the cards may be stacked in your favorite stack system. The deck comes in standard "New deck Order" and may easily be shuffled into various stacks like Si-Stebbins, The Redford Stack, Tamariz's Mnemonica or any of your other favorite stacking systems. The combination of having a marked and stack deck of cards is a devastating tool. When this tool is disguised as a stack of photographs, its EVEN MORE disarming!

Every Photographic Deck comes bundled with a unique set of routines, but virtually any card trick may be performed with this deck. Here's a few that are included:

Photo Reading - Have someone think of one of the photographs and then have them recall a memory in from their own life that the photo invokes. Describe the exact age the participant is in their memory along with exact details without any fishing or cold reading techniques.

Haystack - The participant draws out five or six photos, shuffles them and thinks of one. These images are then shuffled back into the pack. The cards are now dealt out into several piles. The performer is able to then hone in on the exact pile the participant's photograph is in and then somehow narrows it down to the exact image the participant is concentrating on.

The Cardboard Box Mystery - A participant pictures an item as if it was inside the photograph of an empty cardboard box. Another participant selects a photograph from the balance of the talon. Both participants find themselves thinking of the same image!

Number Prediction - A unique prediction using one of the very special cards!

Slots! - Adjust a photograph of a slot machine to win a second time and watch the photograph drop a handful of coins into real life!

Stab Your Mate - A photograph is taken out and placed aside without anyone looking at it.The performer is able to throw the photo of a stop sign face up into the deck only to have it land next to the only other photo that is related to the one placed aside. Is it luck or great skill?

Hide & Seek - You play the part of the psychic, then let your spectator try it. Things start out great but quickly get INSANE.

Photographic Memory - After teaching the audience how to memorize the order of thirteen photographs by creating a story, the photos are fairly mixed up and then the audience somehow is able to arrange them back into their memorized order without knowing how they've done it!

Cardboard Box Secrets - There are some hidden design that you can take advantage of. We can't say too much without giving the game away!

Dash of Curry - The deck is cut in two piles

Photomancy - Two photos are selected and the deck is used as a divination tool to reveal both photographs in a unique way.

Small World - Almost any "Out of this World" style effect is possible with the Photographic Deck. "Small World" happens to be our favorite. Originally released inside the book with the same name sake, this routine is included as an extra bonus!

In addition to the main deck there are TWO expansion packs (available separately) that increase the possibilities even more!

No other deck on the market has ever combined all of these features together in one easy to use system.

This deck has been in the works for nearly fifteen years and its finally ready to share with the world. There are also two different optional expansion packs available (at an additional cost) with more on the way that push the limits of what you can do with this deck even further. 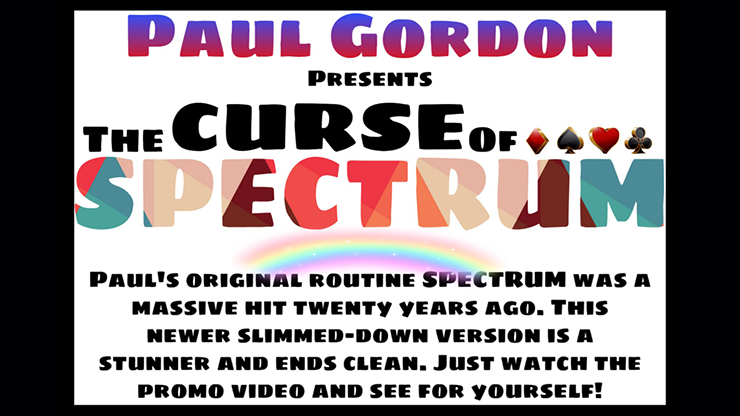 The Curse of Spectrum by Paul Gordon
Eliminator 2.0
Hallucinations
RE by Chris Webb*